For quite a while I have been hearing good things about cordyceps mushrooms, and specifically Cordyceps Sinensis (and the related Cordyceps Militaris) – that it can help with stamina and endurance, and can improve male sperm quality. So what is the truth?

This fungus grows on specific caterpillars in the higher mountain regions of China. Once the province of the wealthy due to its rarity, cordyceps can now be grown in the laboratory under less gruesome conditions. For this reason it is becoming more widely accepted as the price has come down to affordable levels. 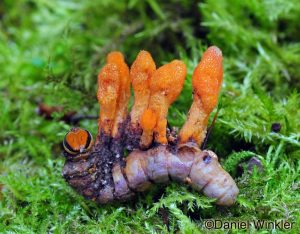 In China this prized herb has been in continous use for several centuries. In this context it has been used to warm and tonify the kidneys (with a particular action on sore lumbar back and knees) and invigorate the lung to ease breathing difficulties. It is also said to dissolve phlegm. In Tibet it is specifically used for weakness and fatigue.

I was particularly interested in its effect on poor sperm quality. In traditional Chinese medicine this is often attributed to a weakness of the kidneys. A trial on 90 laboratory rats given Cordyceps Militaris (American Journal of Chinese Medicine, 2008) showed a significant improvement in both sperm count and motility. Another trial published in the same journal the year before showed a similar effect in a small group of subfertile boars. Both trials suggested that the effect peaked at about 6 weeks, and lasted for at least two weeks after discontinuing the supplementation.

Other research has shown that cordyceps has very low toxicity, though its safety is unproven in pregnancy. Although I could find no formal trials of cordyceps in humans (though research does confirm other pharmalogical effects) , the research on animals seem to reinforce the sperm boosting properties traditionally attributed to Cordyceps by Traditional Chinese Medicine.