What do we mean by rewriting the constitution? When we look in a dictionary, the word constitution is described as the composition, configuration or form of something. In the context of human beings, we talk about having a strong or a weak constitution. We are effectively referring to the aggregate of a person’s physical and psychological characteristics. 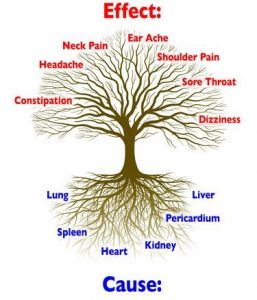 To treat a disease first find the root

When discussing illness and disease Chinese Medicine will talk about the root and the branch (the ben and biao in Chinese). The latter term refers to the ‘outward sign’ or ‘manifestation’. This could be a symptom such as dizziness or headaches. In assessing a patient we would also try to find the root (which is the original cause of the problem). This could for example be a weakness of the Kidneys, which would show up in a number of presenting signs such as the sound of the person’s voice and their facial colour. It is left to the skill of the acupuncturist to deduce the type of disharmony from the signs.

Often just treating the root is sufficient to clear the branches. As the expression goes ‘to treat a disease find the root’. In our example treating the kidneys may clear both the dizziness and headaches. Or we may treat both root and branch together.

Treating the branch without treating the root is however rarely satisfactory. Gardeners will recognise that removing the stem and leaves of a weed, but not the roots often results in the weed reestablishing itself.

The way Chinese Medicine approaches treating imbalance, developed over many centuries, is an elegant way to treat disease. It consistently leads to longer lasting results compared to treating just symptoms. And often treating the root will clear up several symptoms at the same time.