The use of food as medicine in Chinese culture and the role of the spleen can be dated at least as far back as the  Western Zhou dynasty (11th c BC to 771 BC) where food and beverage hygiene were one of the four specialities a doctor could follow (as well as internal medicine, external medicine and veterinary). The ‘Yellow Emperor’s Classic of Internal Medicine’ describes how

used in the right combinations, everyday food can prevent illness. 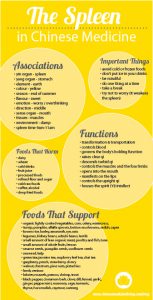 It is with this in mind that we can view the idea of ‘going on a diet’ with fresh eyes. A quick Google search of the word ‘diet’ defines it as

the kinds of food that a person, animal, or community habitually eats.

It may come as a surprise when your acupuncturist starts talking about your spleen as an essential part of your digestive process, after all many people live perfectly well without one. In Chinese medicine the ‘spleen’ is a set of functions involved in the breaking down of food into useful ‘fuel’ and the transporting of it around the body. You may liken the former to the function of a compost heap and the latter to a lorry driver who takes the compost away.

Current dietary advice is to eat 5 portions of fruit/vegetables a day, to cut down on fat and sugar and to reduce ‘bad’ fats. We instinctively know that too much of one thing may be detrimental, but what else can Chinese medicine theory bring to the party?

To delve into this further, let us take the example of chronic diarrhoea, with undigested food passing through the gut. In many such cases there is an underlying spleen weakness. Essentially the breaking down of food is being impaired and the lorry driver is out of control. So how might we address these issues purely through dietary adjustment?

This reveals, in my opinion, some of the essential differences between Western and Eastern dietary practices. In the Eastern model food choices and practices may be advised which reduce the load on the digestion. For example to avoid overeating, especially late at night, and to chew everything well. As the old expression goes

Foods to avoid might include excessively fatty and deep-fried foods, dairy products and raw or chilled foods. But of equal importance are foods which help to strengthen the spleen function. Many of these foods are yellow/orange in nature (which is often said to be the natural colour of the Spleen). Especially helpful examples are:-

These choices are summarised in more detail in the accompanying diagram, but in general the spleen appreciates a freshly prepared range of nourishing foods. If you are in doubt at this stage what to eat, why not try the colour test. Take a look at your dinner plate and look for a balance of the five colours, which are:-

How do you rate?

Visit The Acupuncture Centre at www.acupuncturepaincentre.co.uk